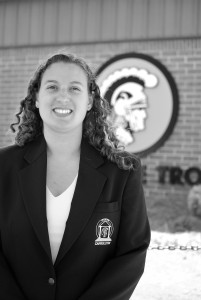 Ms. Menendez, a native of Ontario, Canada, joined the Carrollton City School System as a band director in 2014. After three years at Carrollton Upper Elementary School, she joined the faculty at Carrollton Junior High School. Ms. Menendez is an active teacher, player, and clinician outside of her daily schedule at Carrollton City Schools. In 2015 she presented at the Georgia Music Educators In-Service Conference in Athens, Georgia aimed at aiding young teachers beginning in the field. In 2018 she served as one of the guest conductors for the 2018 and 2022 Fayette County Sixth Grade Honor Band. Past awards include the Fred Factor Award (2016) awarded for going above and beyond as well as the University of West Georgia’s Graduate Studies Fellowship for Underrepresented Minority Students in 2017. In 2019, Ms. Menendez was named the CJHS Teacher of the Year!

At CJHS, Ms. Menendez serves as a member of the PBIS team, the CJHS Trojan Brand Champions representative, and the leader of the Cultural Committee team. Under her direction, The Carrollton Junior High School Wind Ensemble performed at the Reinhardt University Middle School Honor Band as the guest band in October of 2022. In 2022, Ms. Menendez started a middle school honor band group entitled West Georgia Winds. This group aims to provide opportunities to middle school band members across the state who are eager to play literature outside of their classroom and become leaders in their band program. WGW is in its second year of existence and Maria currently serves as the Executive Director. Ms. Menendez currently resides in Carrollton, Georgia.

Christopher Carr joined Carrollton High School as the Band Director in 2014.  Under his direction the band program has grown in curricular offerings through a comprehensive music program consisting of the marching band, three concert bands, three jazz bands, a percussion ensemble, and many chamber music ensembles. Notable achievements of our band program include multiple grand-championships, consistent superior ratings in marching, concert, and jazz band festivals, a growth in student participation in district and state honor bands, and the Wind Ensemble receiving invitations to perform at competitive concert appearances such as the SouthEastern United States Honor Band Clinic hosted by Troy University and the Music For All Southeastern Regional Concert Band Festival hosted by Georgia State University. Mr. Carr was recognized as the Teacher of the Year for Carrollton High School and the Carrollton City School District for the 2020-2021 school year.

Prior to coming to Carrollton Mr. Carr was the band director at South Paulding High School, where he was named the 2014 Teacher of the Year.  The band program consistently earned superior ratings at both concert and marching festivals. Under his direction the South Paulding High School Band performed at the Georgia State University’s Georgia Bands of Distinction Honor Clinic in 2010; the University of Georgia’s January Festival for Concert Bands in 2013; and was invited to perform in 2014 at the Georgia Music Educator’s Association In-Service Conference in Savannah, Georgia; and the SouthEastern United States Band Clinic hosted by Troy University.  Additionally, the SPHS marching band was invited to perform in the London New Year’s Day Parade in 2015 under his leadership at South Paulding.

Previous to his tenure at South Paulding High School, Mr. Carr earned his Masters of Music Performance in Wind Band Conducting where he studied with Dr. Robert J. Ambrose. Serving as a graduate assistant he had the privilege to conduct the Georgia State University Wind Orchestra, direct the Panther Basketball Band, and assist with the Wind Ensemble. Before studying at GSU he earned his Bachelor of Music degree in Music Education and Clarinet Performance at the University of West Georgia. While at UWG he served as an assistant in the music office, the band office, and as drum major of the marching band.

Mr. Carr lives in Carrollton, Georgia with his wife Lindsay Carr, a kindergarten teacher at CES, and their three children: Cadence, Colin, and Charlotte.

Zachary S. Nelson, a native of Carrollton, GA, has always known that music would be his outlet to touch lives since his early involvement in the arts. He got his start as a young musician in church and has continued to serve in ministry faithfully. His dedication and faithfulness has opened many doors for him to play behind many world-renowned artists.

Zachary completed his undergraduate and graduate programs at Jacksonville State University, receiving a Bachelor of Arts and a Master of Arts in Music Education. During his undergraduate tenure at JSU, he participated in several ensembles including Marching Southerners, Wind Ensemble, Percussion Ensemble, Mallet Ensemble, A Capella Choir, Jazz Band, and Jazz Combo. While pursuing his masters, he served as the graduate assistant for the jazz program, teaching one of four big bands as well as small combos. He also taught class percussion, a methods course required for all future music educators.

Zachary has had the opportunity to march Drum Corps International (DCI) with the Kiwanis Kavaliers in 2005 and Winterguard International (WGI drumline) with Odyssey Percussion Theatre in 2006. The skills acquired from those organizations, along with his musicianship, were sharpened by educators, which has helped shape him into the educator he is today.

His passion revolves around instilling positive morals and values into youth. This has been modeled and exemplified by teaching and doing clinics at a number of high schools. In the Summer of 2018, Zachary was blessed to further his teaching experience with Spirit of Atlanta, serving as a snare tech and will return again for the 2019 season as a bass drum tech and all purpose tech. Zachary is also working with other professional organizations for their 2019 season, including Q2, an indoor percussion group affiliated with Atlanta Quest, Point Indoor Percussion, a branch of the music department at Point University, and Atlanta CV.

Family is very important so when he isn’t hard at work, he enjoys spending time with his son, Travis, and daughter, Madison.

Zachary is absolutely thrilled to be back in Carrollton and a part of the Trojan Band again. It is in this very organization where his wind band involvement began. He is humbled that he gets the chance to give back to the organization and community that gave him so much. 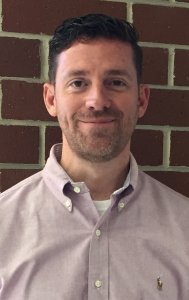 David Trumble is in his second year back to Carrollton City Schools after having been away from us for the past ten years.  Under his leadership our CUES band enrollment has more than doubled.  He received his Bachelor of Music degree in Education from Tennessee Tech University and his Master of Music degree in Trumpet Performance from the University of West Georgia.

He is currently in his 21st year as an educator and will be in charge of our 5th and 6th grade band program at Carrollton Upper Elementary School as well as being on staff with the Carrollton Trojan Marching Band.  Because of his numerous accolades and experience in music education, the University of West Georgia has added him to their Music Education Faculty for the fall of 2020, where he will help prepare the next generation of music educators.  In addition to teaching, he has also worked as a freelance trumpeter in Memphis, TN, and Atlanta, GA metropolitan areas for over 25 years.

Since moving to Georgia in 2002, he has served as guest conductor, clinician, performer, and adjudicator for band programs and honor bands in the metro Atlanta area. Mr. Trumble is a member of the Carroll Symphony Orchestra and the Basement Brass Quintet. His wife is Stephanie Trumble, and his children are Izzy Herring and Kenji Trumble.

In addition to Mr. Brown’s directing experience he serves as a guard tech and designer for Reverie Independent, a local independent winter guard team. He is also the show designer/drill writer for Effingham County High School in Springfield, GA. A native of Sarasota, Florida, Mr. Brown attended the University of South Florida and received a Bachelor of Fine Arts in Dance in 2012.  He has worked with numerous colorguard organizations throughout the country for the past 15 years.  His professional affiliations include: Southern Association for Performing Arts (SAPA), Winter Guard International (WGI), Drum Corps International (DCI), Southern Colorguard Circuit (SCGC), Florida Federation of Colorguards Circuit (FFCC), and Drum Corps Associates (DCA).

Barbara Dothard is a native of Carrollton and a 1971 graduate of Carrollton High School. Ms. Dothard was inducted into the Trojan Athletic Hall of Fame in 1996. She is the mother of CHS graduates Fred and Greg Dothard, the proud grandmother of five and great grandmother of a future Trojan. She worked for Southwire Company and Mt. Zion Missionary Baptist Church where she is an active member. Ms. Dothard loves sports, singing, dancing and cheering for the Trojans. She is excited about being the band secretary and expects great things to happen this year and years to come.